“Time flies when you are having fun.”  That’s how the saying goes.  I see time literally flying by.  Today is the last day of school for the kids.  How did this happen?  I feel like we just got into our routine!  (We’re finally making it to preschool on time!)  Weren’t we just talking about apples on the trees and making book bags?  As I dropped the kids off this morning, I got a little choked up thinking about how far we have come from our first days at preschool a few years ago, when we all had tears.  Now my oldest is learning to read and sends me off with a smile.  My husband helped me to realize something important.  He said, “Time flies when you are having fun, but can feel interminable when things are not going well.”

This week we also celebrate our ninth anniversary of being married.

Had I known how important the choice of a partner is at the time of making this choice, I would probably still be single.  That is not to say I wasn’t focused on finding love in my twenties.  I was.  But, that had more to do with a happily-ever-after fantasy and an idea that my life was moving forward.  I wasn’t truly envisioning life together for the next 75 years.  Washing dishes, watching sunsets, raising children, drinking wine, and sitting on the couch together.  When we chose to be together it was more like the Bruno Mars song, Marry You.  “Its a beautiful night, we’re looking for something dumb to do… Hey baby, I think I wanna marry you!”  When Gus proposed to me in the waves at Hapuna Beach on the Big Island, I said to myself, “I’m in love with this guy!  Of course I’ll marry him… Why not?!?”

I would chalk up finding my great partner to luck and timing.  My husband sometimes reminds me (in jest), that I “shot the moon” when I met him.  But, he is correct.  I did shoot the moon.  And, so did he.  We are well-matched.  We are not alike in everything, but rather challenge each other to think about life in different ways.  We work on our differing communication styles daily!  I believe that there might be other people in the world that we could have ended up with, but our timing worked.  We were ready to meet one another.  We have mapped our lives previous to meeting and strangely enough (having grown up on opposite coasts) there are at least three other times we could have met.  We both agree we probably wouldn’t have fallen in love had we met at those other times.  Luck and timing.

I’m probably not the first to tell you this, but marriage is work.  It is negotiation and compromise.  But, it is also the most wonderful thing to have a “great partner in life”.  In my toast to my husband at our rehearsal dinner, I described the feeling of being with him, as “coming home.”  Thankfully, that feels more true today than it did nine years ago.  He is my best friend and the first and last person I want to talk to each day.  Everyone has their own criteria for love, whether we really know what we are looking for or not.  I don’t think either of us really understood the big decision we were stepping into – I think young couples rarely do.  It is a choice of faith and hope and a bit of luck as well.

I feel supremely lucky to have found a great partner to share all these moments with and I cannot believe that nine years have gone by so quickly.  If we weren’t happy (most of the time), nine years or nine months might just feel like a lifetime! 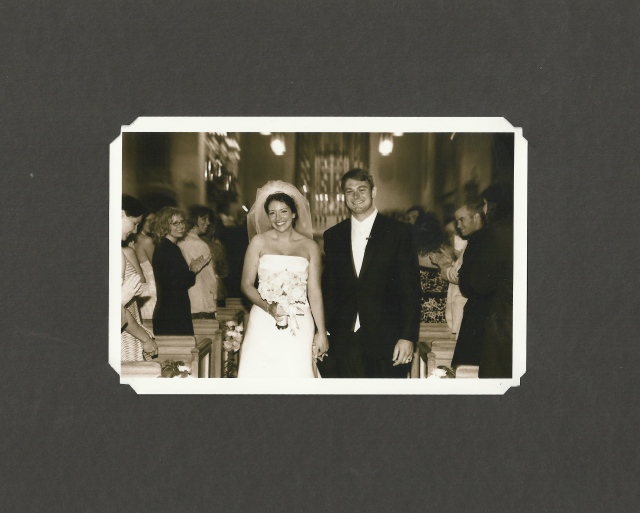